News
You are here: Home / News / News / Sunday is Holiday to Mourn Death of Saudi King

The Custodian of the Two Holy Mosques King Salman announced a closure of government offices and educational institutions on Sunday to allow people to mourn the death of the late King Abdullah, who died on Friday.

The director of the Education Department in Jeddah, Abdullah Al-Thaqafi, told Arab News the vacation will be for one day only and the second semester will begin on Monday in accordance with the royal statement.

The one day closure is for all government and expat schools, colleges and universities in the Kingdom. 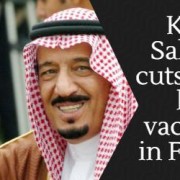