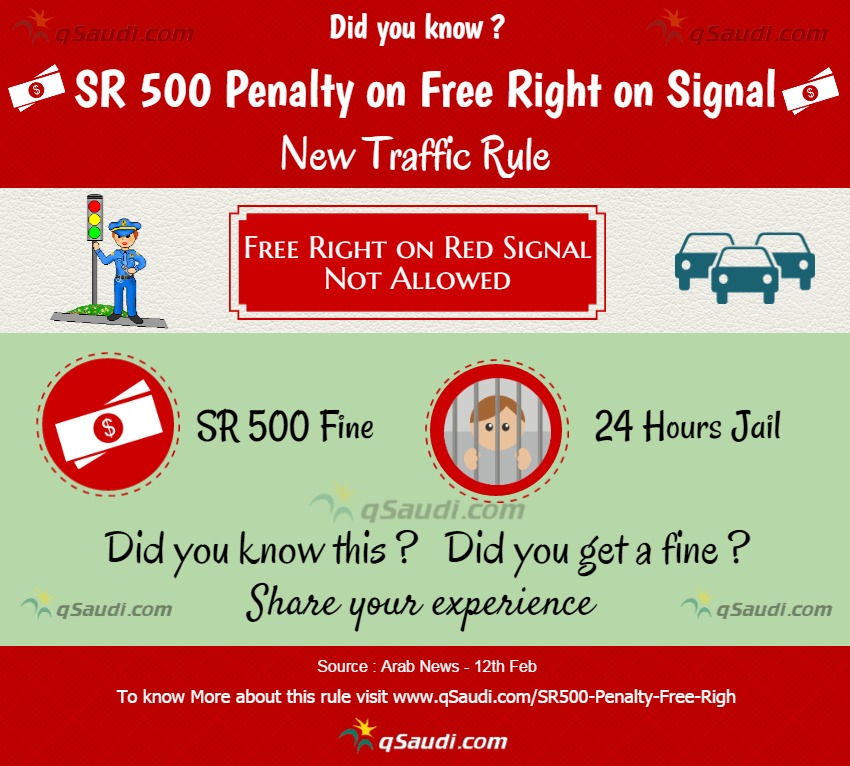 On 12th February Arab News has published article claiming that there is change in rule by Traffic department
wherein a driver will be fine SR 500 and required to do a jail sentence of 24 hours.
The whole thing has taken the entire expatriate community by surprise. First of all no one had heard till the publication of this news by Arab News about the change of this rule. Previously, the motorist were required to stop at signal for few seconds before taking right turn.
However, this stopping at the signal for few seconds and then making right turn was very tricky; you had to stop your can exactly where the sensor is located, and then proceed to make the turn. If you did not stop the car, where the sensor is located, then the camera will flash.
Though the news is published by Arab News, there are few important question which are being raised:
– Why was there no awareness campaign done to inform the motorist about the change in rule?
– Why this news did not appear in other Arabic newspapers of Saudi Arabia ?
– Why are there still sign boards exiting at the traffic signals telling them to wait before making the right turn
– And why the Newspaper published the source from where they found about this rule.
All the above questions raise about the authenticity of the news and makes us wonder – Is it just a rumor ? Are people not aware of the right way to make free right and putting the blame on Saher ?
Let us know what you think.
Update - 17/2/2015

Saving A Camel In KSA – Shocking Video !
Scroll to top