You soon will be saying goodbye to your boring old Iqamas because we are going to have a new electronic-card in town. Its called the Muqeem or Resident Identity card. The Ministry of Interior is in action and has started applying the scaffolding to the newly launched Muqeem project. This project is an advanced and sophisticated version of its predecessor that will bring, to some extent, peace of mind to expatriates and government officials overall.

The card is said to last for almost 5 years, meaning you wont have to get a new physical card every year, if the card owner takes good care of it. This, however, does not mean that residency laws have changed, the residency time period of expatriates will remain the same. A huge round of applause for the Deputy Premier, Crown Prince and Minister of Interior Shaikh Muhammad bin Naif bin AbdulAziz who initiated and is currently leading the Muqeem project. The employers will be able to renew the Resident Identity card online annually, without having to send representatives (mandoob) of the companies to Jawazaat Offices and avoiding the headache of long lines and lengthy waiting times.

This is somewhat similar program to the previously introduced Abshir system for employees which reduced nearly 70% of the crowd at Jawazaat office as reported by officials. The Muqeem project in turn will reduce Residency renewal timing. Police checkpoints all over the Kingdom will also be equipped to interpret data on these new cards. The expiry of residency won’t be printed on the card, it will be stored electronically. These card reading equipment and “Yaqeen” services will be available at many office banks and other institutions for the purpose of reading and recording information from the e-card.

To express my excitement for this new introduction, I made an imaginary illustration of how it might look like.

This project is aimed at reducing the rate of manual fraud and abuse of the Residence Permit (iqama). There are efforts being made to develop the comprehensive database of biometric details of all expatriates and citizens that will aid in combating frauds and crime. Furthermore to add to the news, the Jawazaat also said in its press release that, any expatriate who does not return to the country within the timing given on the exit-re entry will not be allowed to enter the Kingdom for the next three years, new policies and plans are being implemented to ensure tighter watch over the movement of expatriates. Ministry of Labour is also working closely with Jawazaat to combine their intellect and improvise the Labour market as a whole.

and now the Release Date.. The issuance of Muqeem cards will start from the beginning of next Hijri year 1437 or October 2015. However, As confirmed with Colonel Khaled Al-Saikhan Asst. Director reported that it is mandatory for those who want to benefit from the new Jawazat services to have a mail box Saudi Post’s “Wassil” so that they can extend the services to their homes. The Muqeem card’s expiry date and the status (mahna) of the expatriate can be determined by inquiring through SMS “eRaqeed” services and you will also be able to verifying the validity of the card in the system using the answering system via telephone, through “Raqeeb” system, Ministry of Interior’s (Muqeem) website.

Moreover, for current improvements the Ministry of Interior has lengthened their staff timings to allocate time for the additional workload during the holy month. New incoming visitors and workers require extra efforts and so to tackle this situation Dept. Heads have organised dual shifts at the Ministry offices to ensure smooth flow of work.

To sum up the pros of Muqeem, see the below bullet points:

The advantages of new Muqeem card:

The card will have no validity period.
The physical life of card can be upto 5 years or even more.
The period of stay of expatriate will be updated online.
The card will have new look and modern technology to prevent forgery.
The card will be delivered by post
Colonel Khalid Al-Saikhan, director of information technology at Jawazat, this will be new identity card for expatriates. The of issue of Muqeem card will not have an effect on the
existing rules of Jawazat.

The Muqeem card will have the following details printed on it:

Physical Iqama for 5 years.. Lets hope for the best from our Government.

19 Iqama Professions That are not Renewed

Getting a PCC when you're not in KSA 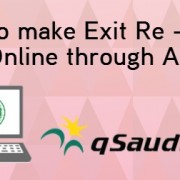 How to make Exit Re-entry visa online through Abshir

Getting the Family Visa for the first time

Where to : find jobs ? Share a cheap room with someone ? For new comers!
Scroll to top